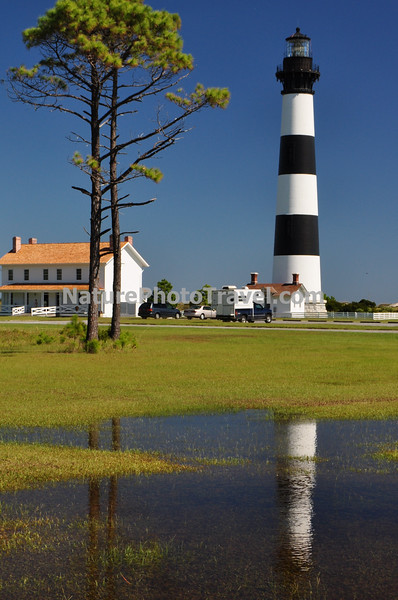 The current Bodie Island Lighthouse is the third that has stood in this vicinity of Bodie Island on the Outer Banks in North Carolina and was built in 1872. It stands 156 feet tall and is located on the Roanoke Sound side of the first island that is part of the Cape Hatteras National Seashore. The lighthouse is just south of Nags Head, a few miles before Oregon Inlet.

1847 - The contractor on the first project was Mr. Francis Gibbons, of Baltimore, who would later become a prominent lighthouse builder on the West Coast. Cost was $5,000 but problems with location and design of the tower caused a ten year delay in construction. The tower was highly unstable and soon after it was completed, it began to lean toward the sea.
1859 - The Bodie Island Lighthouse had deteriorated and the Lighthouse Board secured a $25,000 appropriation from Congress to erect a new tower. This new tower was 80 ft (24 m). and its lantern was a third-order Fresnel lens.
1861 - In the fall of 1861, Confederate troops stacked explosives inside the tower and blew it apart.
1871 - A third lighthouse was completed in 1871 partially with material left over from construction of a new tower at Cape Hatteras. The tower was 156 ft (48 m). with a first order Fresnel lens that made its light visible for 18 nautical miles (33 km). The Bodie tower is painted with white and black horizontal bands